Each Friday we highlight recent news or interesting stories from the world of HR. For this week, we share Marissa Mayer’s foray into design, the call for the White House to pay its interns and how moderate amounts of alcohol can improve problem solving skills.

The CEO of Yahoo!, Marissa Mayer, shared on Tumblr her role in helping redesign the company’s logo of more than 18-years. According to Mayer, she knows enough about Adobe Illustrator “to be dangerous” and so gathered her design team over a weekend to update the logo. Many designers and advertisers have expressed frustration over Mayer being so intimately involved in the process instead of trusting her team. Others are impressed she took the initiative. Regardless, Mayer proves there is a market for teaching yourself Adobe, no matter what your title or field.

Two weeks ago, our Friday News Roundup shared a response from Fistful of Talent to an unpaid internship position being posted for Sheryl Sandbery’s organization, Lean In. It seems the debate has now drawn in the highest office in the land with a recent petition by the FairPay Campaign. The petition calls on the White House to pay its interns, asserting it would be hypocritical not to do so in light of President Obama’s desire to increase minimum wage. Currently many White House interns are unpaid as their duties fall within the Fair Labor Standards Act guidelines.

A Case for Drinking On the Job? 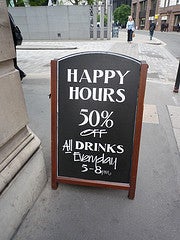 A recent study out of the University of Illinois at Chicago argues moderate drinking during work hours can be beneficial to problem solving. Study participants were asked to complete common creative problem-solving tasks after being brought to a blood-alcohol content level of .075—the equivalent of four drinks (defined as one ounce of 100 proof liquor or one 12-oz beer) for a 200-pound individual. Individuals from the test group were able to solve the tasks in less time than the non-intoxicated control group. While it’s doubtful this study will signal the return of the 3-martini lunch, the findings are an interesting option for companies facing difficult problems that could use some out-of-the-box thinking.